The Institute of the North is honored to have organized, in cooperation with Finland’s TEM and many partners, the 2017 Arctic Energy Summit in Helsinki, Finland, from September 18 -20. Attended by 300 people from more than 15 nations, the 4th Arctic Energy Summit covered a wide array of energy topics, from oil and gas to renewables, energy efficiency to affordability. Most importantly, the Summit’s outcomes are delivered to the Arctic Council’s Sustainable Development Working Group (SDWG), which met in Inari on September 21 and 22.

“The Arctic Energy Summit has become a standard for a comprehensive regional approach to energy challenges and solutions”, says Nils Andreassen, the director of the Alaska-based Institute of the North, project coordinator on behalf of SDWG. The project reports back to the Arctic Council the findings from the Summit, including best practices, lessons learned, research gaps, and policy relevant findings. A final report will be released in the months to come.

A number of themes emerged over the course of the Summit. Climate goals have become a major driver for a transition to renewable energy, though the pace and prioritization will vary by nation. As Summit co-organizer, Mikko Martikainen of Finland’s Ministry of Economic Affairs and Employment (TEM) notes, “The wide area of energy deliverables highlighted during the Arctic Energy Summit clearly shows that the Arctic region is leading in discussions of energy innovation and ambitious policy that addresses future energy needs and climate change”. Nordic nations lead in this arena, while the North American region focuses on increasing affordability for remote communities. Attention to energy efficiency was common across states, and it was apparent that technology could be leveraged across renewable and non-renewable sectors.

Questions remain, however, and provide potential agenda items for the future. Transportation, logistics and storage all were highlighted as important issues to address. At the same time, there remains a need to understand better – and see best practices applied to – how local and indigenous communities can engage in decision-making processes related to energy projects, and how benefits should accrue to nearby rightsholders. Concepts of energy poverty, climate justice, innovation, risk mitigation and impact benefit all deserve more attention in future activities.

Sponsors of the Summit included Finland Ministry of Economic Affairs and Employment; Government of Germany’s Energiewiende; Institute of the North; Government of Iceland; Fortum; Ukpeagvik Iñupiat Corporation; Embassy of the Unites States in Finland; and City of Helsinki. 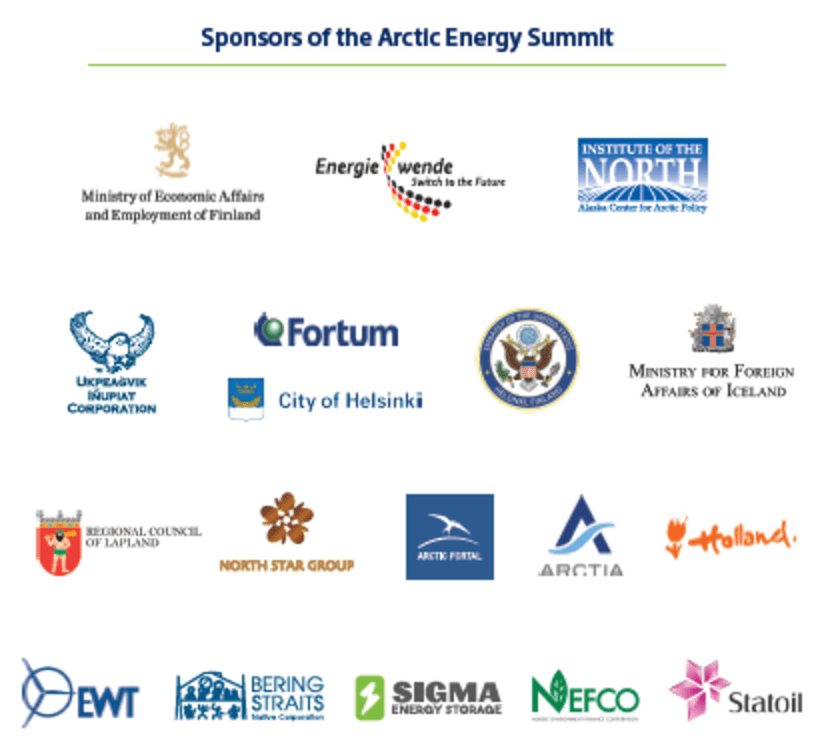